The Death of Worthy Bigwood

Leave a comment Posted by Farmer Bullshot on November 5, 2014

Worthy Bigwood is a name that could have come straight from a Charles Dickens novel. He died on 5th November 1835 after a drunken night out with the boys commemorating the Gunpowder Plot. 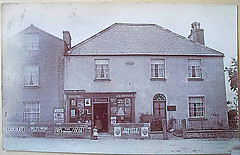 This is not just about Worth Bigwood but about the others around him and the inevitable connection to my family tree.

The investigation began with the census record in 1861 for Lois Codrington, post-mistress, and her extended family.

William, her husband had died in 1848 leaving her with five children, two of whom, William and Walter, were living with her in 1861.

William had been the post-master at Pilning (Cross-keys) near Almondsbury in Gloucestershire, and when he died his widow took over the position.

There were also others living at the same address along with Lois:

So why were there three nephews and nieces with her, and all with different names?

It took a while to track down everyone and to work out what was going on – and everything is not quite as it appears.

I looked for Lois and thought, initially that her maiden name could be either Bigwood or Bailey, but did not find a Lois (or Louisa) with either of those names.

What I did come across was Elizabeth Croome who married one Worthy Bigwood and then I tried to link the two families, but without any success.

I was pretty sure that this was the right person and that Lois was actually Lois Croome, sister of Elizabeth, but there is no record of her birth – or her marriage to William Codrington.

I went through a long process of eliminating all of the other possibilities but eventually had the marriage confirmed (by another researcher) as taking place 7 Jun 1825 in St. Mary, Redcliffe, Bristol – incidentally where my parents were married.

But there is still no birth record for Lois or Louisa Croome.

But the Agnes Codrington in the 1861 census was only 10 years old so could not be the daughter of Lois and William and it turns out she had died in 1838 at the age of just five.

The younger Agnes was probably named after her, but who were here parents?

Agnes was baptised 8 June 1851 and her mother shown as Ursula Codrington (the daughter of Lois and William) but no father, so I am assuming that Agnes was illegitimate.

In the 1861 census she is shown as niece to Lois but is more likely to have been grand-daughter.

Ursula was born in 1828 and would have been 23 when Agnes was born.

Ursula later married Mark Greenman, a widower with 3 children, in July 1861 and was living in S. Wales in 1871, when Lois is shown as a visitor in the same census.

Marrying off single mothers to widowed fathers seems to have been common practise and the fact that Agnes was shown as a niece rather than grand-daughter avoided some awkward questions.

The mother of Lois, Hester aged 65, was shown in the 1841 census living in Mangotsfield with the Greenway family at Bromley Farm so the families may have been related in some way.

Mark is shown as a widower in the 1861 census and Ursula is missing from the census for that year.

In the 1871 census her daughter Agnes is a servant in Bristol and married Thomas Turnbull in 1873.

On the marriage record Agnes’ father is shown as William Codrington, which is her grandfather’s name.

Unless, of course, there are more secrets to be discovered …

Elizabeth was married first to Worthy Bigwood in 1832 and then to Thomas Bailey 10 years later, so the two nephews are the children of Lois’ sister Elizabeth from two different marriages.

Sadly Elizabeth had died shortly before the 1861 census and Lois was looking after two of the children but I do not know where the others were, or their father Thomas – most of the Bigwood children were old enough to have left home.

In fact I have not been able to trace Thomas after this point and some of his children are unaccounted for.

There is a marriage certificate for Worthy and Elizabeth, baptisms for all of their three children and a death record for Worthy, but no birth record for him.

William was not registered as living in this property at the time but in Sutton Veny, Wiltshire so this may not have been the same William Codrington who was postmaster at Pilning.

On the other hand if Worthy did come from Wiltshire originally then it may have been through a link with the Codrington family.

His tragic death is registered in 1835 and recorded in the local paper the following year – it should be a lesson to us all.

Something occurred of an excitable nature 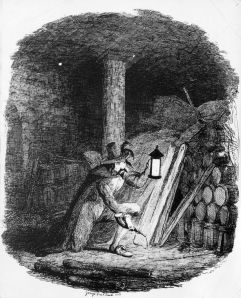 Manslaughter – Joseph Smith, aged 19, was charged on the coroner’s inquest with killing and slaying Worthy Bigwood. The particulars of this distressing case, as given in evidence, were to the following effect:- The prisoner and deceased, with some others, had been on the 5th of November, making calls on the farmers’ houses in the neighbourhood begging cider in commemoration of Gunpowder Plot. In the evening they were in the White Horse, Almondsbury drinking; about half-past ten the landlord refused to draw any more beer, and they left the house.

After proceeding a little way, something occurred of an excitable nature, and Bigwood, the deceased, (who was a heavy man, and beyond comparison more powerful than the prisoner) challenged any one of the company to fight. After a while, prisoner said, if no one else would take him he would. They had a scuffle and fell together, when a man named Gibbs, another of the party, told Bigwood to fight with a man and not with a boy; thereupon they also had a scuffle and fell very heavily together, Bigwood under-most. Gibbs was taken off him and Bigwood was lifted up. He was then walking away along the road, when the prisoner crossed over to him, and struck him a blow on the neck. He did not appear to be aware of the intended attack, as he did not put up his hands in his defence; but as soon as he received the blow, he fell to the ground immediately , never moved, and never spoke a word afterwards; in a state of drunkenness and irritation he was dispatched to eternity with awful instantaneousness, as if struck to the earth by a flash of lightning.

The Learned Counsel for the defence endeavoured by cross-examination to show that death might have been occasioned by the fall during the conflict with Gibbs; but the surgeon denied the natural possibility of that being the fact from the peculiar symptoms of the case which he described. It transpired in favour of the prisoner, that he had always borne a good and peaceable character; while the deceased appears to be a very quarrelsome person. When Bigwood fell, a witness told the prisoner that he was afraid he was dead, prisoner replied, he hoped indeed he was not; he had not the least intention to do him a severe injury, and he was very sorry for what had taken place.

The jury returned a verdict of guilty. His Lordship in passing sentence said, he was not inattentive to the good character the prisoner had received, nor to the other mitigating circumstances of the case; certainly he was sorry that the fatal blow was inflicted at a period when no mutual conflict was going forward; it would have been much more creditable and manly if it had. But he found nothing of that description to which his attention had unfortunately been called at the present Assizes; and he should take this opportunity of letting it be seen the distinction he made between a case of this sort where men use their natural weapons, and those of a brutal, foreign, and un-English description, where death has been occasioned by the means of dangerous and desperate weapons. As the prisoner had done nothing of this sort, had received a good character, and had already been in prison since November, his Lordship sentenced him to be further committed till the end of the Assizes, and then discharged.

It is good to know that, even though he was found guilty, Joseph did not spend too much time in prison. I’m sure we all know – or have met – someone like Worthy Bigwood.