Leave a comment Posted by Farmer Bullshot on December 25, 2014

I had always thought that “glen” was included in this song – from the 1960’s ITV series, starring Richard Greene – just to rhyme with “Men”.

Perhaps that is the real reason – you don’t find many glens in England – but it may not be too far from the truth.

Several people have been identified as being the inspiration of the legend, or at least as having made a contribution to the stories.

One of these is David, Earl of Huntingdon, also known as David of Scotland – which would account for the “glen” reference. [okay, it’s a pretty tenuous link].

David was the youngest son of Henry of Scotland and the grandson of David I, King of Scotland. He was born in about 1144 and was around at the right time to have been on the third Crusade with King Richard I.

He took part at the siege of Nottingham Castle where the High Sheriff of Nottinghamshire and Derby County was taken captive.

He was also the heir to the Scottish throne until he denounced his claim in 1188, although the circumstances around this are not known.

David of Scotland is pictured on the cover of Sir Walter Scott’s 1832 crusader novel The Talisman.

Although emphasising his own story is fiction, Scott’s introduction states that David did go on crusade with Richard the Lionheart and was the hero of some very romantic adventures on his way home.

David features briefly in the 2013 Robin Hood novel The Arrow of Sherwood by Lauren Johnson.

He is depicted at the siege of Nottingham Castle in support of King Richard in 1194.

In 1632, the ballad writer Martin Parker published a ballad about Robin Hood. He also sought to make him a historical person. He titled his account, ‘A True Tale of Robin Hood’ and claimed to present ‘truth purged from falsehood’. Parker wrote of ‘Robert Earle of Huntington vulgarly called Robin Hood who lived and died in AD 1198’. Parker wrote an epitaph that he claimed to have seen on Robin Hood’s gravestone. It read:

Here underneath this little stone
Lies Robert Earl of Huntington
Never archer there as he so good
And people called him Robin Hood
Such outlaws as him and his men
Will England never see again.

David did have a son Robert but he died in 1221 at the age of 29 – possibly on crusade – and was probably never the Earl of Huntingdon, despite being the eldest son.

But that is not to say he could not have been a great archer and there is a two year gap between the death of his father in 1219 when he could have briefly inherited the title.

This story seems to have its origin in a rare play:  “The Downfall of Robert, Earl of Huntingdon, afterwards called Robin Hood of merrie Sherwoode.”

As I am outlawed from my fame and state,
Be this day outlawed from the name of daies:
Day lucklesse, outlawe lawlesse, both accurst.

[Flings away his napkin, hat, and sitteth downe.] 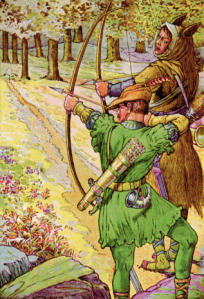 On balance I think David and his sons are more likely to be contributors to the stories rather  than the origin of the legend.

A more likely candidate was Roger Godberd, a supporter of Simon de Montford (21 x great grandfather) during his failed rebellion.

Roger was an outlaw around 1260, some time later than David who died in 1219 [and later than the Kirklees inscription].

Quite a number of his activities seem to be replicated in the stories found in the earliest Robin Hood ballads. He poached deer in Sherwood Forest, was captured by the Sheriff of Nottingham, was imprisoned in Nottingham Castle and had the assistance of a friendly knight who helped him stay one step ahead of the law.

After evading the authorities for years, Godberd was eventually captured in the early 1270s and jailed. But he was pardoned at his trial at the Tower of London and returned to his farm where he lived until his death

Could the “friendly knight” mentioned here refer to John, Earl of Huntingdon, the son of David of Scotland?

The earliest known legal records mentioning a person called Robin Hood (Robert Hod) are from 1226, found in the York Assizes, when that person’s goods, worth 32 shillings and 6 pence, were confiscated and he became an outlaw.

Roger Dodsworth identified Robin Hood with ‘Robert Loxley’, and stated that he was born in Bradfield parish in Hallamshire (South Yorkshire). He believed that Robin was first outlawed for killing his stepfather when ploughing.

Dodsworth also believed that it was Little John rather than Robin Hood who was Earl of Huntingdon, which could refer to John, who inherited the title from his father, David of Scotland.

The Wakefield contender is a follower of the rebel [Thomas] Earl of Lancaster who was defeated by Edward II at the Battle of Boroughbridge in 1322 – again this is much later than some of the other stories.

Whoever was the origin of the stories and whoever contributed to the embellishments that became a legend, it seems that some of my distant ancestors played a part.