Leave a comment Posted by Farmer Bullshot on October 5, 2014

It is generally accepted that John Codrington was the standard-bearer to King Henry V at the battle of Agincourt, 1415, but is this just a bit of Codrington propaganda?

The battle at Agincourt was towards the end of the French campaign of King Henry V and occurred on 25th October 1415.

John Codrington was 50 years old during the campaign and went on to live until he was 111, according to the dates inscribed on his tomb.

He is depicted on the cover of at least one book about the campaign and also as an historical figurine as Sir John Codrington, although this title is incorrect.

But there are also claims that the standard bearer was actually Sir William Harrington.

Quoted from “The Harington Family” by Ian Grimble:

Sir William Harrington of Farleton was the king’s standard-bearer at Agincourt and was made a Knight of the Garter in 1416.

The visitor’s guide to Dodington – until recently the home of the Codrington family –  says:

For his valor at Agincourt in 1415, he was appointed the sovereign’s standard bearer

This could be interpreted to mean that he was made standard bearer after Agincourt.

A more likely version of the story is this:

John was not the original standard bearer for the campaign, but after some success the King had to leave men behind to hold the captured town of Harfleur and one of these may have been his standard bearer, Sir William Harrington, perhaps because he was injured.

Because of his prowess in a previous battle John was promoted to standard bearer for the journey to Calais where the remainder of the army was to return to England. 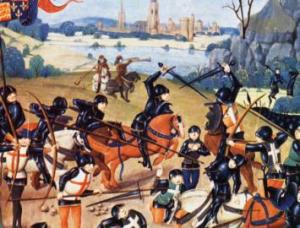 King Henry had not planned for any significant fighting after Harfleur and had sent a large part of the army back to England, along with his “great booty”, and this could have included Sir William Harington, who certainly got as far as Harfleur.

After several weeks repairing the defences of the town, Henry left behind 1500 men and headed for Calais intending to return to England himself, capturing a few smaller towns as he went.

But the French had been incensed by the  activities of the English king and intercepted Henry with a much greater force at a place known – from the name of a nearby castle – as Agincourt.

The English were outnumbered six times and it should have been an easy victory for the French – a turning point in the relationship between the two countries – but it was not to be.

A short account of the campaign can be found here.

The visitor’s guide to Dodington does contain a number of inconsistencies so cannot be regarded as historically accurate and if this was a bit of propaganda generated by the Codrington family then it seems to have worked.

But there are other references to the battle that also say that William Harington was not at Agincourt, although he was on the campaign, which fits with the Codrington account.

Sir William is mentioned in many books about Agincourt as he helped to fund the campaign and had his own retinue, and John Codrington [Codington] – as part of the retinue of Sir William Burchier [1] – is hardly mentioned at all.

An internet search brings up more references to models of Sir John Codrington than anything else, but practically nothing is written about him in relation to the battle itself.

The introduction to The Memoir of Sir Edward Codrington (1770-1851) says that one of his ancestors was standard bearer to the Black Prince [Edward] but this would have much earlier and is not mentioned elsewhere.

There a number of other Harington references from various accounts, the first regarding William and how we know he was at Harfleur.

Mons. William Harington – By his Indenture of Jewels we learn that he intended to bring 9 lances and 30 archers into the field. A cask of wine was issued to him at Harfleur.

John, Lord Harington. – He was a banneret. He indented to server with 2 knights, 27 men-at-arms and 90 archers mounted. [He returned to England with his knights on 5th October due to illness and missed the battle]

Sir James Harington. – he was dead, and his Account was rendered by Nicholas Harington and Richard de Sherburn, his executors.

There is also a Symond Codington mentioned, as part of the retinue of Thomas de Camoys [2]. If Symond was closely related to John Codrington then I would have expected him to also be in the retinue of William Bourchier, but is likely that he actually came from the Coddington family and is not related.

John Codrington was my 14th great-grandfather in a direct line from my grandmother, Emily Codrington.

Sir William Harington was [probably] my 16th great-grandfather through the marriage of Hester Harrington and William Stubbes.

[see An heiress and of a Norfolk family]

The reference to Sir William was originally found in this article, about relations with the Shakespeare family.

The story goes that the French cut off the fingers of all English archers that they captured so they could not fire a bow.

When the English archers were confronted by the French at Agincourt they waved their two fingers at them to show that they could still fire their bows.

So whenever I see England v France I find it mildly amusing, whether or not this story is true.

Being standard bearer is not to be confused with the position of Thomas Strickland who carried the banner of St. George in the battle.

This was a much more difficult role, being unmounted and defended by just a few men at arms.

Some of the figurines depict Thomas mounted which is incorrect, at least for this battle.

On Friday 25 October 1415 Thomas and his Men at arms, including a group of elite archers known as “the Kendal Bowmen”, were part of the army of King Henry V that won a major battle at Agincourt in North West France against superior numbers. As Thomas was a Knight in training (Esq) he fought dismounted with a sword, it was a question of honour that any one who carried the banner of St. George did so without the protection of shield as they would be protected by their men at arms.

John was at least mounted and, being close to the King, was well protected.

[1] William Bourchier, was an English knight who fought at the battle of Agincourt and was created 1st Count of Eu by King Henry V.

[2] At Agincourt, Lord Camoys commanded the rearguard, on the left of the English line, and in recognition of his service was made a Knight of the Garter on 23 April 1416.

Posts Agincourt, Codrington
← Trust Nobody The Wreck of the Constance →